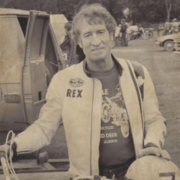 Born April 17, 1930, Rex Turple played minor hockey in Olds and advanced to the Olds Elks Intermediate A team, playing with them for nine years. He traveled to Europe to coach and play hockey in Scotland, England and Austria.

The Rex Turple Scholarship is available for students playing hockey for the Red Deer Vipers or the Heritage Junior “B” Hockey League.

Note: As per CRA regulations, our Foundation is not at liberty to disburse the awards directly to recipients. Rather, we release the funds directly to the post-secondary institution, which then credits the student’s tuition account.

Each award has its own criteria, deadline and submitting process. Please read all pieces of the application carefully.